I’m always fascinated by muscular anatomy.  Without our skeletal muscles our bones would collapse in a pile on the floor.  The physics behind how muscles and fascia keep our bones upright and functional is astounding.  Once one begins to learn about these connections between muscles, tendons, ligaments, bones and fascia it becomes clear that there are really no isolated issues in the body because all of these cells work together to create homeostasis as we know it.  Let me explain.

Today, my knee is sore.  As I mentioned in my previous post, I’m experiencing some dull pain in my patellar tendon, particularly after my knee has been in a still flexed position.  This is apparently common among runners, especially new runners, especially new runners like me who have pre-existing knee issues.  In the comments of my last post, Emily brought up the great point that much of the issues she had with her patellar tendon were due to tension in her Iliotibial Band (ITB); this is also common among runners.  What Emily is really illustrating here is that while she experienced pain around her knee, the cause of the pain was coming from an area that most likely didn’t feel noticeably painful.  Since the body is so interwoven, it’s important to look at aches and injuries in 360º as opposed to just treating the isolated area. 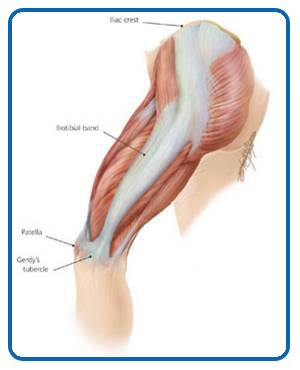 In Emily’s situation, her ITB was becoming increasingly taught, which can happen for various reasons.  I would speculate that most likely as the muscle tissue grew underneath/around the ITB it would cause the ITB to have decreased blood flow causing ischemia to the tissue which resulted in the taught feeling.  At its distal end, the ITB crosses the knee laterally and connects to the tibia.  A tightening of the ITB could cause a stretching force to be put upon the ligaments medial to the kneecap (patella) as well as compressing the ligaments lateral to the patella. 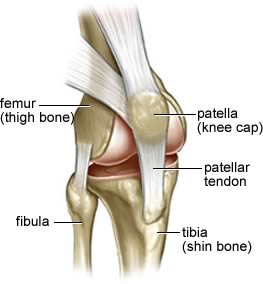 In Emily’s case, she wisely chose the RICE solution: rest, ice, compression and elevation.  Once acute pain was gone, she added additional stretches into her routine that help support the ITB and surrounding musculature, along with using a knee brace while she runs.  The stretches most likely help increase blood flow to the tissue surrounding the ITB as well as encouraging the ITB to soften and allow for easier movement.  After all, the ITB is just a big band of fascia and fascia, when warm, gets nice an mooshy and flexible.  However, when cool it can be taught and brittle.  This is one of the main reasons why stretching before and after exercise helps prevent injury.  On the flip side, in some sports (including running) it’s also important not to overdo it in the stretching department as that can effect one’s stride and can even cause injury due to hyper-mobility of the joints.

Phew!  Thanks for being such a great example, Emily!  Now, what was my deal?  Well, I’ve mentioned previously how surprised I’ve been by the lack of tension in my ITB; a trend many barefoot runners seem to benefit from.  However, in my quick palpations of my knee area last night, I neglected to take my own 360º advice.  Sure enough, as soon as I gave myself a little more attention today I noticed exactly what was pulling on my patellar tendon; my quads are tight as hell!  I had made an excuse for myself earlier by assuming my patellar tendon hurt mostly because I do have tracking issues with my patella.  However, I underestimated my own body by thinking the issue was so isolated. 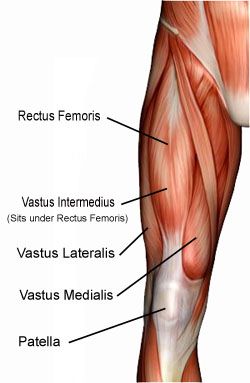 As I mentioned previously, the patellar tendon is the ligament at the distal end of the quadriceps, where they intersect with each other.  By massaging the distal heads of the quadriceps and using the exercise demonstrated below I was able to create a marked change in how my knee felt.  I’m also going to take Emily’s great advice and use a knee brace (though I’ll be honest the one I picked up today is kind of bulky and uncomfortable, so I may get a different one) and also plan to add more quad stretches to my pre-workout routine.  I’m sure I’ll be updating you all with the results!